Pakistan has preserved its cultural roots and heritage through the recognition and maintenance of different architectural sites present throughout the country. Some of these revolutionary landmarks are remnants of the dynamic history and diverse communities that make up the country’s past. These include the Persian and Aryan invasions, Mughal rule, British colonialisation etc. The values and cultures of these civilisations are reflected in a large number of architectural styles that are displayed, each with its own distinct characteristics.

Graana.com explains the significance of these architectural developments that spanned over scores of centuries. 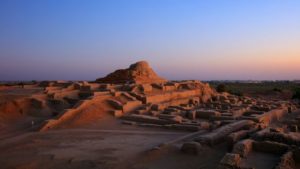 It was a story that began thousands and thousands of years ago. Pakistan’s past is comprised of several heritages, including that of the Neolithic period and the earliest civilisations that prospered along with the ancient Egyptian and Mesopotamian civilisations. This is due to successive waves of migrations from the northwest as well as internal migrations across the subcontinent; for example, the Aryans, Persians, Greeks and Arabs had all travelled to and settled in this region.

One of the most famous ancient civilisations was the Indus Valley Civilisation, which dates back to 3000 BC. Its sites include Mohenjo-Daro and Harappa, both recognised by UNESCO as World Heritage Sites. Some traces and findings of these locations indicate wealth and prominence, confirming that some of the earliest urban structures in the world were found here.

The Mehargarh civilisation dates even further back to 5000 BC. It is regarded as one of the most important Neolithic sites in archaeology, with its discovery providing insights on the Stone Age people of South Asia and their agrarian lifestyles.

The Gandhara civilisation, which can be found in what is now known as Taxila, was an educational centre for Buddhists, attracting pilgrims from all over Asia.

All these influences – in terms of typology, expression, design and people – represent the various stages of progression in the nation’s history. 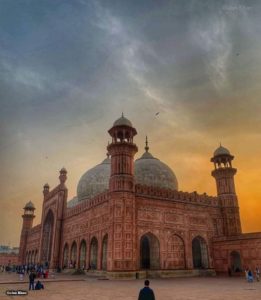 The Mughal empire was at the height of its power from the 16th to early 18th centuries, during which they brought about Turkish and Irani architectural influences to the Indian subcontinent. Islamic building elements greatly inspired these architectural styles, such as pointed arches, minarets, domes, and muqarnas. Forts, palaces, gardens, tombs, bazaars and mosques were built all across the country. The geometric patterns, the intricate embellishments and designs, the distinct hue of the red sandstone used for construction – all boasted extravagance and reflected nobility in their details. Some of the more popular landmarks include Badshahi Mosque, Hiran Minar, Masjid Wazir Khan, Shalimar Bagh and Tomb of Jahangir. The legacy of Mughal architecture demonstrates the grandeur of one of the most impressive civilisations of the world.

A New Wave of Development Through Colonial Architecture 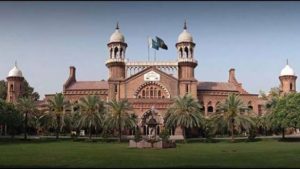 As the ruling powers shifted in the region, the British brought the Victorian and neoclassical styles of architecture to the subcontinent. Examples include Frere Hall and St. Patrick Cathedral, both located in Karachi. There was also an increase in the number of Gothic churches; the St. Paul Church in Rawalpindi is one well-known example.

In the mid-19th century, a new wave of Indo-Saracenic architecture began. This merged and balanced different Sikh, Hindu and Islamic architecture elements with western architectural influences. This period was characterised by more modern designs involving open pavilions, pointed arches, harem windows, and natural light’s dynamic play. For example, the Clock Tower in Faisalabad is a mixture of British and Indo-Islamic architectures. The Lahore Court Building, constructed by the British Raj, was inspired by both British and Mughal architectural styles as well. The Noor Mehal in Bahawalpur, with its long columns and vaulted ceilings, is another important trademark of this era. 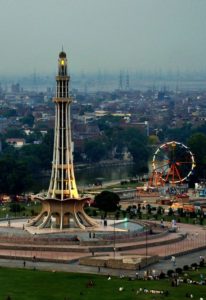 A new trend broke out after the partition of the subcontinent: architectural buildings were used as means to reinforce the newfound Pakistani identity among its citizens. There was a more vertical orientation in construction, and national monuments were built all across the country, for example, Minar-e-Pakistan (Lahore), Pakistan Monument (Islamabad), and Quaid-e-Azam’s Mausoleum (Karachi).

An increased fascination with Western ideals, designs and lifestyles eventually caused different Western movements – like modernism, postmodernism and the contemporary – to be gradually woven into the local architecture style. Many leading architects started to focus on purpose rather than style and expression; spaces now incorporated functional elements rather than just aesthetically pleasing ones. There was an emphasis on sustainability, flexibility, negative space, simplicity, and using prefabricated industrial materials. Various techniques and practices were adopted that met the new, established standards of a modern yet cost-conscious lifestyle. The Faisal Masjid in Islamabad, Pakistan’s second-largest mosque, is one notable example; the structure was planned and designed according to the Greek-inspired urban grid.

Pakistan stands tall as a nation for its historical, modern as well as contemporary architecture. Its architectural heritage pays tribute to its rich, extensive history, from modest beginnings to carefully-planned urban structures. The manner in which the architectural scene was forced to develop itself through the ages and thrive is reflective of the strong and persistent character of its people.

The Principles of Property Inheritance That You Need to Know