“Solid wastes are raw materials we’re too stupid to use” – Arthur C. Clarke

The situation of waste management in the world is in a heap of trouble. The principle of sustainability states that in a natural cycle without any human presence, the production of waste will be zero owing to the natural recycling of nutrients. Humans violate this principle by producing large amounts of waste that pollute the environment. The subsequent environmental and economic effects are ominous.

According to the United Nations Environment Program (UNEP), the developed countries produce 80% to 90% of the world’s hazardous waste; the United States of America is the largest producer of solid waste which accounts for 33% of global waste. China is predicted to be next.

Despite this, the silver of the stated mega-problem is that as per research, 90% of the waste produced can be reduced and reused through various means.

While discussing this concept, Graana.com states various options that facilitate solid waste management in a bid to live sustainably. 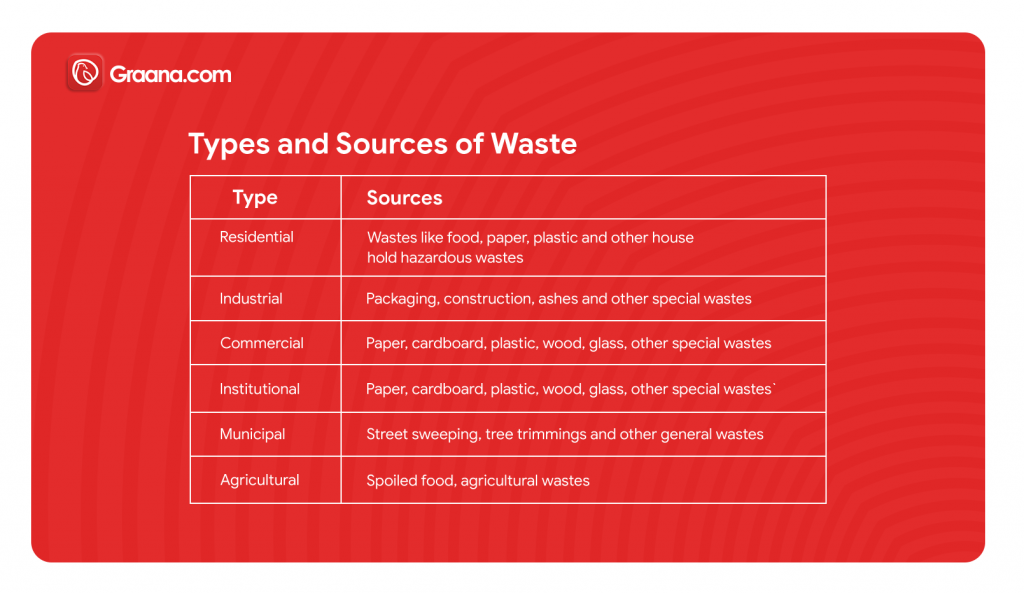 The management of solid waste in Pakistan is not at its optimal level. According to statistics, only 50% of the hazardous waste is efficiently disposed of in various cities across the country. However, to maintain cleanliness and encourage sustainable living, 75% of the generated waste should be collected and then subsequently disposed of.

Pakistan lags when it comes to the disposal of waste. The waste management system remains underdeveloped without clear guidelines for the collection and disposal of waste. In absence of a proper mechanism, untreated waste poses grave threats to the environment and the people. The risks include health hazards owing to clogging of drains, stagnation of ponds, and thus subsequent breeding of mosquitoes result in diseases such as Cholera and Malaria. In addition, due to a lack of disposal strategy, much of the waste sits on land, open grounds and water sources such as ponds, rivers and the Arabian Sea.

According to the United Nations Expert Group Meeting on Sustainable Application of Waste-to-Energy in Asian Region 2018, Pakistan is estimated to produce 20 million tons of solid waste annually, which has been increasing at the rate of 2.4 per cent per annum. The Government of Pakistan (GOP) statistics show that the waste generation stands at 71,000 tons per day, mostly from the metropolitan cities; Karachi produces the largest volume of waste amounting to 9,000 tons daily.

Below is a list of the volume of waste generated in major cities of Pakistan per day: 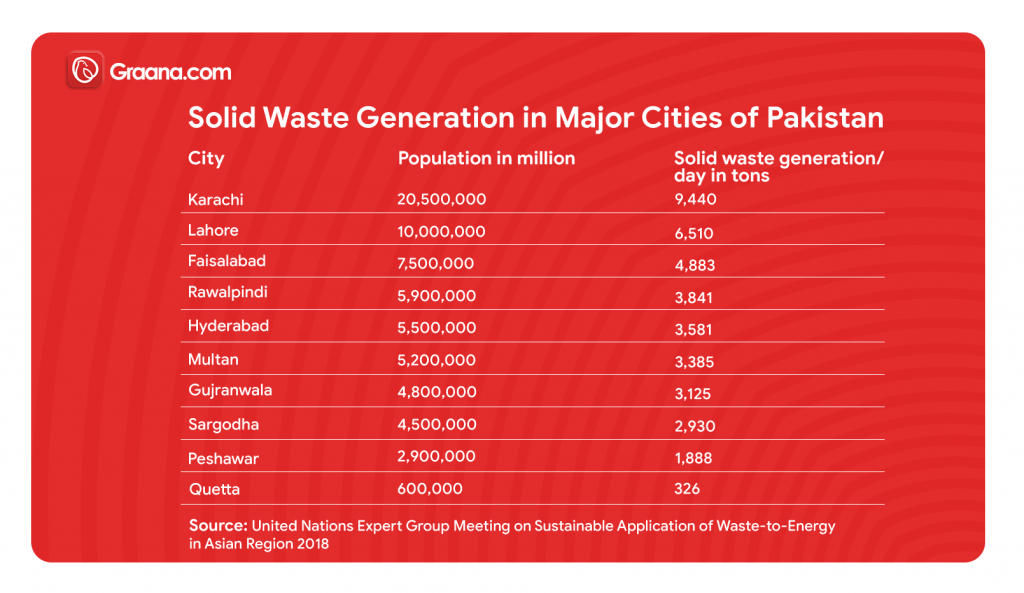 Ways to Deal with Solid Waste

The process of waste reduction is fairly simple. It is based on three Rs namely; Reduce (reduced consumption), Reuse (repeated use) and Recycle (repurpose).

Solid waste can be managed by reducing the volume of solid waste produced. Less waste will mean that there are fewer pollutants to take care of. There are several strategies to reduce waste. Firstly, the manufacturing processes can be redesigned in such a way to allow for maximum output by employing fewer materials and energy. In other words, they can be redesigned to make them more efficient. Secondly, steps can be taken to develop products in such a way that they are easy to repair. For example, Xerox uses used parts in its production process that allows them to save $ 1 billion annually. Thirdly, the elimination of unnecessary packaging can significantly help cater to consumerism and reduce waste. A welcome step was taken by 37 European Union countries that require recycling of 55%-80% of packaging waste. Lastly, governments should initiate measures where serious legislation is passed to help curb the menace. It can be done by introducing a waste collection system where a fee is charged for every bag of waste produced. This will allow the citizens to be mindful of their waste production.

Reusing products extends the lifespan of the product and diminishes the volume of solid waste that is to be disposed of sustainably. One way the products can be reused is through the cleaning and using of the materials over and over again. In countries like Denmark and Finland, legislation has been passed that bans the use of beverage containers that are not reusable. Moreover, in Finland, 95% of beverage containers are refillable. In addition, the country of Ireland induced a tax of 25 cents per plastic shopping bag. Initially, there was a backlash against the new law but with time the people became accustomed to it and welcomed the use of reusable bags. Lessons can be learned from these progressive countries that have not only undertaken active steps towards sustainable living but have also successfully mitigated the problem of solid waste management. The same model can be easily replicated in other countries.

According to statistics, the value of recycled material in the United States of America accounts for nearly $50 billion. That is a huge sum of money that is easily generated through recycling old material for new purposes. Of these recycled materials, iron and steel are the most recycled. There are two main reasons for this. The main reason is that there is a huge market for these metals and secondly, there are huge economic and environmental costs attached to it. Hence, to save money and the environment, these two metals are most recycled.

Not only can solid waste be recycled, but technological advancements also allow for the efficient recycling of human waste. The use of human waste, or “night soil,” on croplands is an ancient practice. However, it may lead to an increase in diseases if not properly managed. The problem is increasingly becoming a complex one because along with human waste, chemicals and metals also flow through the waste stream which makes it difficult to separate the materials for waste management. With the increase in urbanisation, even garden waste that is composted may contain harmful chemicals, such as pesticides.

The issue of solid waste management is not a new one. However, it requires immediate attention for it poses great environmental, economic and health threats. The solutions are plenty but the implementation is below par. With active steps, the menace can be successfully addressed.

Traffic Advisory for Commuters of Islamabad, Rawalpindi, Lahore, and Karachi