The Most Distinctive Elements of Islamic Architecture

Islamic architecture is an amalgamation of the finest feats of carvings, gold details, and mesmerising hues that have been a part of Islam’s rich culture throughout centuries. With the evolvement and expansion of Islam, the cultural and religious influence also left its influence on the various architectural styles that we see in Islamic sites.

Most of the design and architecture is for Islamic Mosques (Muslims’ place of worship), and might rarely also be found in palaces, tombs, and forts.

Graana.com has covered the extensive history that has influenced the characteristics of Islamic architecture, let’s take a look at what distinguishes it from other architectural designs and features.

Prominent ages that have shaped the design and art for Islamic architectural history are the result of the influence of Arab and Muslim majority countries such as Iraq, Algeria, Egypt, etc. Other than this, the shift of design can also be traced back to European regions i.e. Spain, Italy, Portugal, etc.

As of now, we can see a mix of contemporary and historical styles in Islamic architecture that has been shaped mainly from Roman times, the Mughal Emperorship Period, Chinese Architecture, and the prominent period of colonial rule around the world. 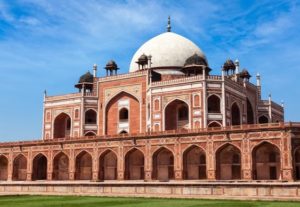 Domes are an ancient aspect of Islamic architecture that has continued for centuries. These are generally hemispherical three-dimensional structures that are hollow from the inside. These resemble an igloo-like structure and allow natural light to accommodate in itself. Domes are the very first features of Islamic architectural history and remain vital to this day. It started from the influence of Ottoman architecture and is adapted in various designs and shapes such as Coved Domes, Onion Domes, Braced Domes, Beehive Domes, etc. 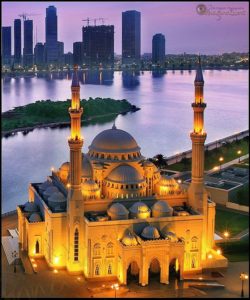 Minarets are tower-like structures that feature small windows or carved details. It is similar to a ‘spire’ and sometimes encloses a staircase. It is one of the most common and oldest features that is found in all mosques. This form of architecture came into Islamic history to allow the muezzin (One who calls the Adhan) from an elevated place. The minarets date back to sultanic times when the use of minarets can be found in abundance and is still a significant part of mosques. 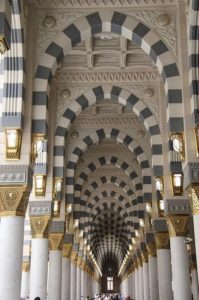 Arches, similar to the semi-circle shape of the dome, are an important fixture found in many Islamic sites. It is mainly evident in entrances and wall interiors. Arches are a smooth addition to give an overall structured look, contrary to the geometric architecture found commonly in the modern era. There is a variety of arches found in the designs, mainly categorised as ogee, multifoil, pointed, and horseshoe arches. 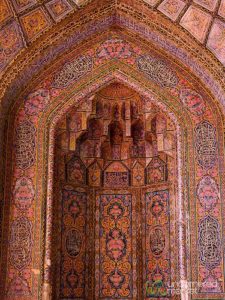 Muqarnas is the honeycomb-like tiny detailed structure that is sculpted in the architectural sites. This is ornamentation that generally is applied to parts of vaults. Other than this, these are very commonly found decorated under the domes, arches, and squinches. The word Muqarnas originates from the Arabic word ‘Qarnasi’, which stands for intricate and detailed work. Muqarnas symbolises the complex history and richness that is cultivated in Islamic practices and ideology. 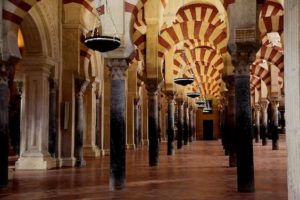 Hypostyle Halls date back to the Umayyad Dynasty and are physically shaped as square or rectangular halls that are arranged in a grid pattern. These columns modify the spiritual expression of the ideologies that are in Islam, besides serving visual aesthetics to the sites. For congregational prayers, hypostyle halls are a very prominent feature used in the construction of mosques, such as in the Hagia Sophia Mosque, Istanbul. 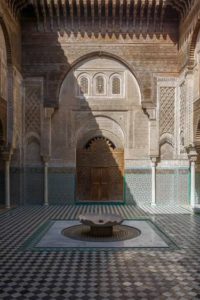 Because of Islam’s origin from the Middle East, there is a very significant influence of Arab culture in Islamic architecture. Most of the palaces, tombs, and mosques under the umbrella of Islamic architecture feature huge courtyards that are to gather a large number of people for festive prayers and occasional occurrences. These courtyards are surrounded by fountains from which people perform ablution before the prayers. 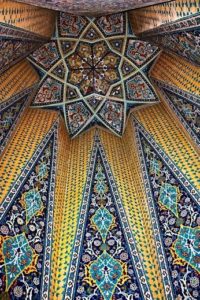 The influence of art on architecture has given Islamic sites a significant standing, which distinguishes them from other feats of architecture from around the world. Hailing from its Arab roots, the decorative patterns follow the details of floral motifs, intricate paint detailing, gold details, calligraphy, and geometric patterns. A common design that features everywhere is the eight-pointed star and the crescent. There is a symmetrical aesthetic that follows every architectural feat. 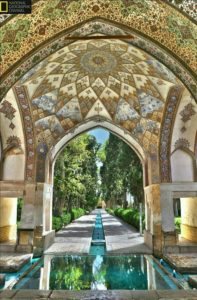 Lush green gardens are not only an added visual aesthetic to the Islamic architectural places, but also add coolness and beauty to the site. These gardens are situated in vast spaces alongside the richly designed buildings and feature marble water fountains, ponds, and flowers surrounding the lush green grass. There are many references in the Holy Quran about the serenity of gardens in paradise, which the Islamic sites feature in their architectural sites as a spiritual and pleasant addition. 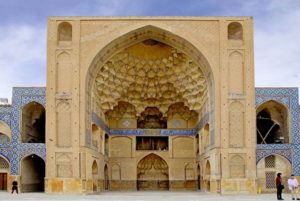 Iwans are rectangular arcuated halls that are covered three-way with walls and have one open side with a vaulted ceiling. Iwans are grand designs that are used for entrances to open spaces (e.g. courtyards), and usually feature snippets of calligraphy, geometric designing, and tilework. 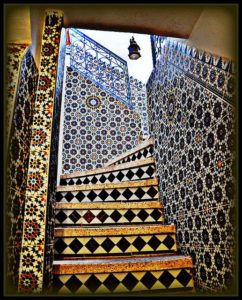 Islamic architecture has an extensive history of carving and decorative tilework, all that was featured on walls, under domes, and exterior of the buildings. Tilework became famous and took over Islamic architectural design in the seventeenth century, which was the golden era of the famous tilework.

The tilework features mosaic art with detailing and is used in decorative patterns which bring both colour and beauty to the building. Generally, ceramic tiles are used for this technique. Buildings in Iran, Turkey, and various other Islamic countries all over the world. This beautiful abstract technique is a very distinctive feature that differentiates Islamic architecture from modern and renaissance art.

These significant elements are what make up the essence of Islamic architecture all around the world. If you’re looking to take a better overview of the types of buildings and mosques, you can check up on these beautiful mosques in Pakistan.

The post The Most Distinctive Elements of Islamic Architecture appeared first on Graana.com Blog.