While one may consider a freeway as a long, winding road that is lined with the same fast food outlets and gas stations, they are largely underestimating the innovation brought about in the process of going from one place to another. In the past few decades, the booming population of Pakistan has dramatically increased automobile ownership and, consequently, created a new demand for efficient road systems. The improved construction methods, coupled with stringent safety standards, led to a wide network of roads in all major cities. Shahrah-e-Faisal in Karachi is one such example; considered a feat of engineering, this route represents the transition from dirt tracks to highways and freeways in the nation.

With mobility being an important aspect in modern life, Shahrah-e-Faisal supersedes other freeways as a wider and safer road system. It stretches from the Bhutto Underpass (near Hotel Metropole) in the city centre to Star Gate (near Jinnah International Airport), where it meets the N-5 National Highway. Its total distance is 18 km (or 11 miles), along which an estimated number of 250,000 vehicles travel on a daily basis.

Graana.com, Pakistan’s smartest property portal, has prepared a guide to help you navigate one of the longest freeways in Karachi. 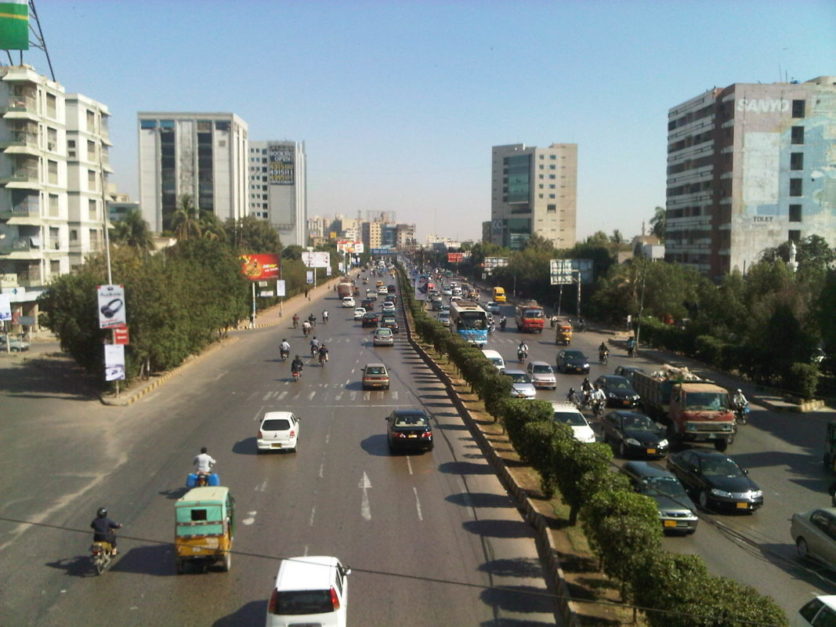 The freeway was originally known as Drigh Road. While there is a lack of information on its origin, some records state that the first Air India flight took off in 1924 from Karachi’s Dirge Road Aerodrome. It was a Royal Air Force base, where the famous T. E. Lawrence was stationed between 1927 and 1928.

The name was later changed to Shahrah-e-Faisal in 1977, during the regime of General Zia-ul-Haq, in honour of the late King Faisal of Saudi Arabia.

However, only the road was renamed while the names of the Drigh Road Railway Station and Drigh Road Flyover remain unchanged. In spite of that, old locals sometimes still refer it as Drigh Road.

It was considered a part of the National Highway in the 1970s. In the 1980s, the management of Shahrah-e-Faisal changed hands from the Government of Sindh to the Karachi Metropolitan Corporation. 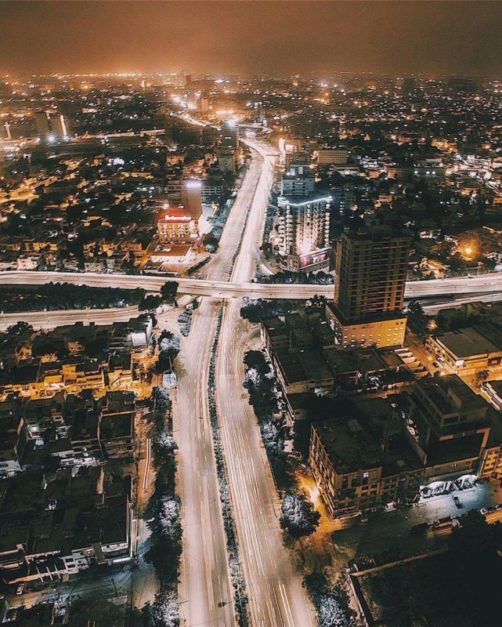 Shahrah-e-Faisal reflects the evolution of road transportation in Pakistan as it slices across the metropolitan city of Karachi.

Freeways and highways were originally meant to serve as key elements in long-distance automobile travel and prevent slow-paced traffic, but they also indirectly promote commercial businesses along their lengths. For instance, the construction of Shahrah-e-Faisal has allowed the businesses situated on the freeway to expand, including hotels, retailers, offices etc. As a result, the infrastructure of support businesses (like gas stations) has also grown. 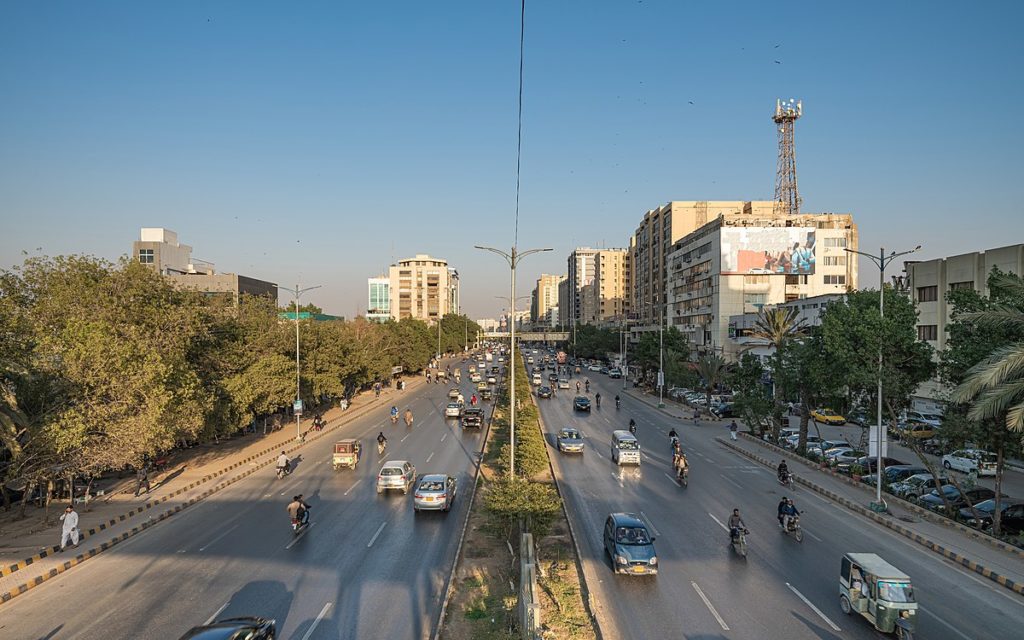 The following are the major flyovers, bridges and underpasses located on the main Shahrah-e-Faisal:

The first intersection on Shahrah-e-Faisal — if you are travelling from the eastern side, where Malir District and Shah Faisal Colony (formerly known as Drigh Colony) are located — is the one that leads to Jinnah International Airport (also previously known as Drigh Road Airport). It provides a direct link to Airport Road. There are also many public transportation facilities on the road, which you can avail to reach the airport.

The Karsaz Road Flyover Bridge is an exit point from Shahrah-e-Faisal, which leads to KDA Scheme 1 and Stadium Road. It is constructed as a dual carriageway structure with multiple spans, to facilitate the heavy traffic coming from both Shahrah-e-Faisal and National Stadium. Hence, the intersection is signal-free, ensuring a smooth flow of traffic.

A petrol pump is also situated a short distance away.

There is also an underpass at this intersection to restrict the flow of traffic on Shahrah-e-Faisal as well as Dr. Daud Pota Road.

The Baloch Colony Flyover is the busiest point of Shahrah-e-Faisal as it leads to its main business district, where head offices of many corporate companies are located.

You can exit Shahrah-e-Faisal through this four-lane flyover, and head on to Shaheed-e-Millat Road if you want to visit DHA Karachi, Defence View, Korangi Town etc.

The Rashid Minhas Road Intersection takes you to the neighbourhoods of Gulistan-e-Johar, Gulshan-e-Iqbal, Nazimabad or Federal B. Area if you take a right turn on Shahrah-e-Faisal. It also leads to the Drigh Road Railway Station.

However, if you continue travelling on the road, you would be able to access a few fuel stations dotting the sidelines.

Just a minute’s drive from the Baloch Colony Flyover, the Tipu Sultan Flyover takes you towards the direction of Jinnah International Airport or Malir Cantt, from the areas of Karachi Cantonment, Saddar Town etc.

The Shahrah-e-Quaideen Flyover links to SMCHS and PECHS. This flyover project was meant as a solution to the bottleneck problems on the many adjacent roads. Due to its construction, the heavy traffic coming in from the direction of Mazar-e-Quaid could flow directly towards Shahrah-e-Faisal through this flyover, plus the pressure on Tariq Road (the first intersection of Shahrah-e-Quaideen) also decreased.

From Regent Plaza, you can enter Shahrah-e-Faisal from Sir Ghulam Hussain Hidayatullah Road, or exit the freeway to get on Rafiqi H. J. Road.

It also intersects many other major roads of Karachi, including:

Updates Over the Years

Shahrah-e-Faisal links to many prominent areas of the city, including:

Among the well-known hotels in Karachi, Shahrah-e-Faisal is home to a few of them, including PC Hotel and Mehran Hotel.

Some of the Shahrah-e-Faisal restaurants include Karachi Foods, Lalqila Restaurant, KFC, McDonald’s and Bait-al-Mandi.

The Shahrah-e-Faisal offices of major companies include Careem and Mobilink (Head Office, Karachi). There is also a software house at Shahrah-e-Faisal, which accounts for many data entry jobs in Karachi.

If you are looking for residential properties near Shahrah-e-Faisal, or even commercial properties, you can visit Graana’s regional office located on this very road.

When to DIY or Hire a Professional for Your Home