Pakistan’s Exports to China, US, EU increases between July-April FY2021

The exports marked an increase of 31% to $1.9 billion to China, due to implementation of second phase of the China-Pakistan Free Trade Agreement (CPFTA) between both the neighboring countries from January 1, 2020 and spanning till 2024. 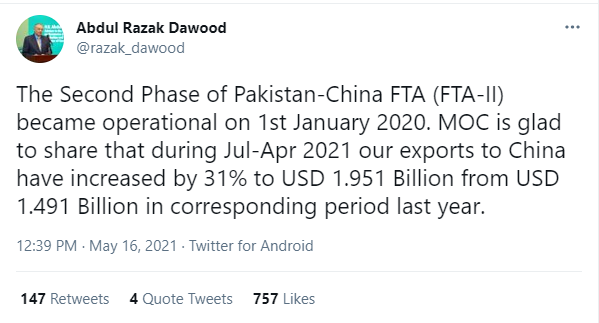 Taking the microblogging site – Twitter, the Adviser to PM on Commerce, Abdul Razak, Dawood lauded the efforts of MOC’s Trade & Investment Officers and urged them to provide maximum facilitation to our exporters & Investors.

Pakistan’s total exports in July-March FY2021 were recorded at $18.6 billion, marking a positive growth of 2% in value, as per the data released by the State Bank of Pakistan (SBP).

Things to Consider Before Designing a Floor Plan

Opportunities and Challenges in the Real Estate Sector in 2021