Minar-e-Pakistan is a national historical monument in Lahore. The tower was constructed between 1960 and 1968 at the location where the All-India Muslim League passed the Lahore Resolution on March 23, 1940. It marked the first official call for an independent homeland for British India’s Muslims, as advocated by the two-nation theory. In 1947, the resolution was instrumental in the creation of an independent Pakistani state. The tower is situated in the heart of Greater Iqbal Park. 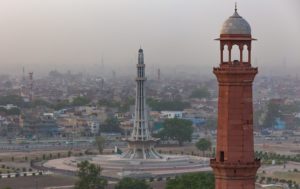 Graana.com explains all you need to know about Minar-e-Pakistan.

The Minar e Pakistan holds great historical importance since it symbolizes a whole freedom movement. The day of March 23, 1940, is remembered as the day when Muslims demanded their own homeland. It echoed Allama Iqbal’s presidential address from Allahabad in 1930, in which he expressed his desire for an independent country for India’s Muslims. The Lahore Resolution urged that Muslim-majority districts in India’s north-eastern and northwestern zones be united as independent states.

The tower features crescents and stars, symbols of Pakistani culture that are also found in the national flag. The base is approximately 8 meters above ground level. The Minar’s overall height is around 70 meters above the ground, with the tower rising about 62 meters above the ground. The flower-like base’s spreading petals reach a height of 9 meters. The tower’s diameter is approximately 9.75 meters. The rostrum faces Badshahi Mosque and is comprised of patterned tiles. There are four platforms in the base. The first platform is made of uncut stones from Taxila representing the unwavering efforts of Muslims, the second level is made of hammer-dressed stones representing the rigorous struggle for freedom, and the third platform is composed of sculpted stones representing the progress of the movement, and the fourth made up of white marble to represent the success and sovereignty of the freedom movement. The base of the tower is designed like a flower. Parks and flowers surround the memorial. 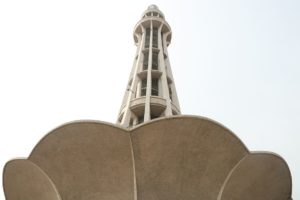 The architecture of the Minar e Pakistan is a mix of Mughal/Islamic architecture and contemporary styles. Nasreddin Murat-Khan, a Russian-born Pakistani architect and civil engineer, designed and directed the construction of the tower. Botanical engravings on ten focalizing white marble Historical plaques can be seen at the base. The engravings include the content of the Lahore Resolution and Delhi Resolution in Urdu, Bengali, and English. Quranic verses and 99 attributes of God are etched in Arabic calligraphy on various plaques, whereas the National Anthem of Pakistan in Urdu and Bengali, excerpts from Muhammad Ali Jinnah’s speeches in Urdu, Bengali, and English, and a few couplets by Allama Iqbal. 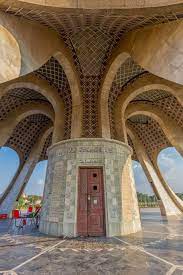 On March 23, 1960, the foundation stone was placed. It took eight years and cost Rs 7,058,000 when it was completed on October 21, 1968. At the request of Governor of West Pakistan Akhter Husain, the money was raised by levying an extra tax on movie and horse racing tickets. Visitors can climb the stairs or use the elevator to the top of the minaret to get a panoramic view of the city. It is utilized for political and religious gatherings. It’s also known as Pakistan’s “Liberty Tower.”

The Minar e Pakistan is a reflection of Muslims’ never-ending hardships and endeavors to get their beloved motherland. It serves as a reminder of the blood, sweat, and tears that went into obtaining this freedom. The Minar-e-Pakistan is a significant landmark in Pakistan and a contemporary interpretation of Islamic and Mughal architecture. It is not only historically significant for Pakistanis, but it is also a popular tourist destination. It is surrounded by a large park, an artificial lake, and trickling fountains, all of which add to its beauty. A large number of tourists visit the site each year.