Everything You Need to Know About Khewra Salt Mine

It’s unknown to many people that the Khewra Salt Mine; the world’s second-largest salt mine, is located in Pakistan. It is one of the oldest salt reserves found in the sub-continent.

Also known as Mayo Salt Mine, it is located in the north of district Jhelum which is about 160 Km south of Islamabad. The famous Himalayan Salt; aka Pink Salt, also comes from this mine.

It is one of the major tourist attractions in Pakistan. Visit Graana.com to find more informative blogs on various topics.

History of Khewra Salt Mine

The history of this mine dates back to 320 BC when the troops of Alexander the Great stopped at the region of Khewra for resting. There is a famous story about how they discovered the mine. It is said that the horses of Alexander’s army were found licking the stones, and one of the soldiers noticed it. He tried licking one stone himself and found it salty, and that’s how the Khewra salt deposits were discovered.

However, the trading of salt was not initiated until Mughal rule over India. They traded the salt to different markets including the far off markets of central Asia. With the downfall of the Mughal empire, Sikhs took over the mine.

In 1872, the mine was further developed by the British. Many inefficiencies were found by them in the mines such as narrow and irregular roads, no water supply, absence of warehouses etc. They addressed all these problems to make the whole process more efficient and safe for the labourers.

Khewra salt mine is located in Tehsil Pind Dadan Khan of District Jehlum in province Punjab of Pakistan. It is about 200km away from the capital city Islamabad. You can reach there via the M2 motorway.  Salt range’s total length is 200km from the place of Baganwala to Kalabagh. The mine is 288m above sea level while its underground area comprises 110km2.

The mine has 19 stories in total, and eleven of them are underground. From the entering point, it is 730m long into the mountains. All the tunnels of the mine are about 40km in length. Throughout the year, the temperature of the mine stays between 18-20 degrees Celsius.

To avoid the whole mine from collapsing, only half of it is mined for the salt and the rest serves as the support column.

The Khewra Salt Mine also contributes to the tourism sector, because of the presence of some unique and interesting sights in it.

As one of the major tourist attractions it receives nearly 250,000 tourists annually. The local artists have carved eye-catching replicas of various monuments and landmarks inside the mine, using salt bricks of different colours.

There are small electric trolleys that take you inside the mines. These trolleys are said to be from the period of the 1930s when the mining began at Khewra for the first time. They still work perfectly. A ticket is charged per person for travelling, however, you can also go with a group of people, in that case, they won’t charge per head. This trolley ride is just for those who don’t want to walk, so if you are someone who would prefer to explore the place more keenly, you have the option to go to the assembly hall by walking.

The trolley train will take you from the entrance to the main hall of the mine that is called the Assembly Hall. This place is 75m high. There is a natural carving that can be found on the walls of the Assembly Hall, which according to locals, resembles the Poet of East Dr Allama Mohammad Iqbal. 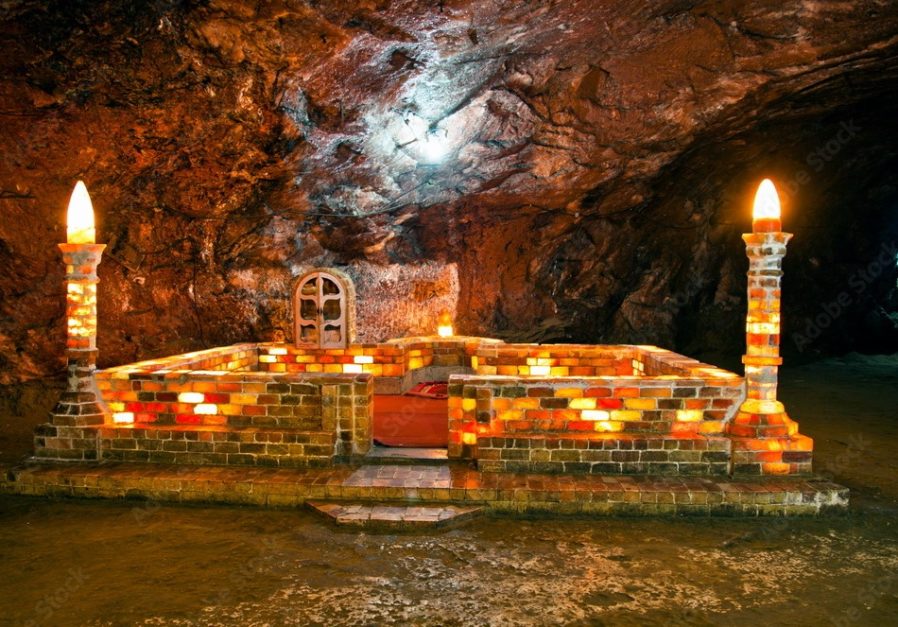 MIniature of Badshahi Mosque at Khewra Salt Mine, source Freepik

There is a pretty miniature of the Badshahi Mosque built inside the mine. It is one of a kind because of being the only salt mosque in the whole world. Red, pink, and white/transparent salt bricks are used for building the mosque. They have put the light bulbs within the recesses of its walls, which illuminate the mosque and make it look even more mesmerising. It also has two rock salt minarets. 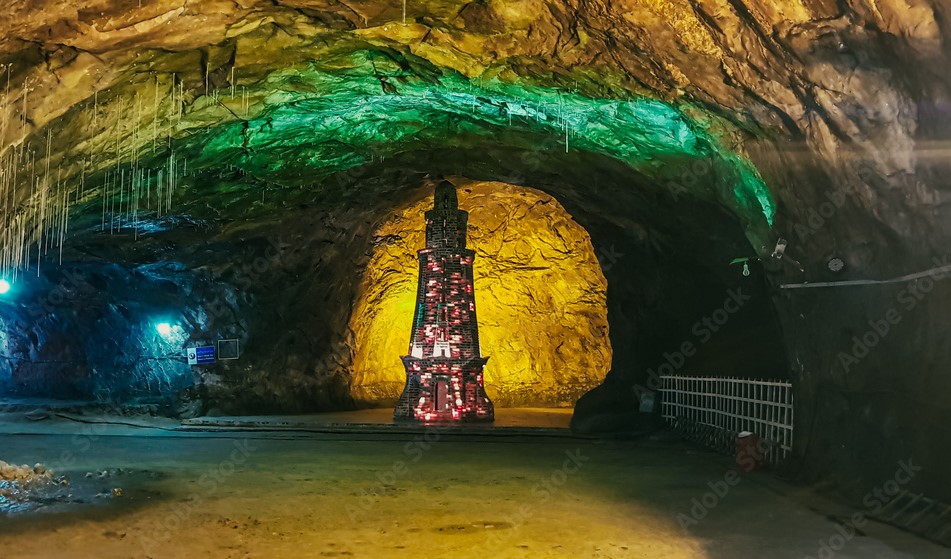 Miniature of Minar-e-Pakistan at Khewra Salt Mine, source Freepik

Another miniature of our national monument; Minar-e-Pakistan is built inside the mine. Just like the previous one, it was also built using pure salt bricks, and illuminated by light bulbs.

Miniature of Minar-e-Pakistan is standing tall along with a few other national, and international landmarks, including Lahore’s Shimla Hill, Great wall of China, and Murree’s Mall road.

All of these miniatures are built with different coloured salt bricks and are equally illuminated.

Very surprisingly, there is a Post Office located inside the mine, which is also one of a kind as it is the only Post Office in the world made up of salt bricks. It is not just for the show, in fact, it is a fully functional office, which is mostly used by the workers there.

This bridge is 25 feet long and is known as “Pull Saraat”. There is a saltwater pond under it. This bridge is also made up of salt bricks.

The unique feature it possesses is that it has no pillars for support which make it more adventurous for the tourists.

You might be thinking that there is an actual fountain inside the mine, however, that’s not true. It is not a real fountain.

There is this place in the mine where the salt has taken the shape of flowing water over the years, which make it look like a fountain, hence it is named Salt Fountain.

Inside the Khewra Salt Mine, there is a tunnel named Sheesh Mahal. The reason it’s called Sheesh Mahal is that its roof shines in the presence of light, making it look like a mirror. 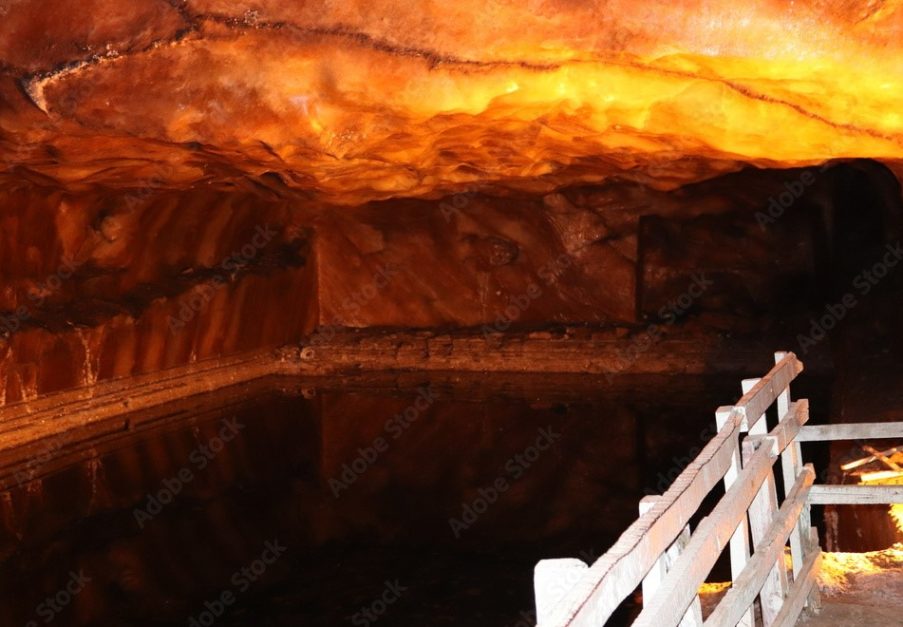 Another surprising thing about these mines is the presence of several Salt Ponds. Visitors are not allowed to use them, but they can cross the bridges built over them to have a look.

The Khewra Salt Mines is a place worth visiting. It not only has its historical importance but also has its value in terms of tourism. If you ever get a chance to go to the place, definitely go there and enjoy the tour to the world’s second-largest salt mine. Also, you can bring a cute salt lamp from there as a token of memory.

The post Everything You Need to Know About Khewra Salt Mine appeared first on Graana.com Blog.

Top Bedroom Furniture Ideas in Pakistan to Refine Your Bedroom

RRR project contract to be awarded to govt. companies only