Urban renewal is an economic and development tool to renovate and resuscitate the aggravated conditions of impoverished or degenerated regions in an urban city. Such regions are marked with dilapidated infrastructure, stunted economy, lack of private investment, inadequate sanitation, unfit living conditions, deteriorating buildings/houses, contaminated water, and so on. Urban renewal breathes a new life in such unsustainable regions and stimulates private investment and sustainable solutions. 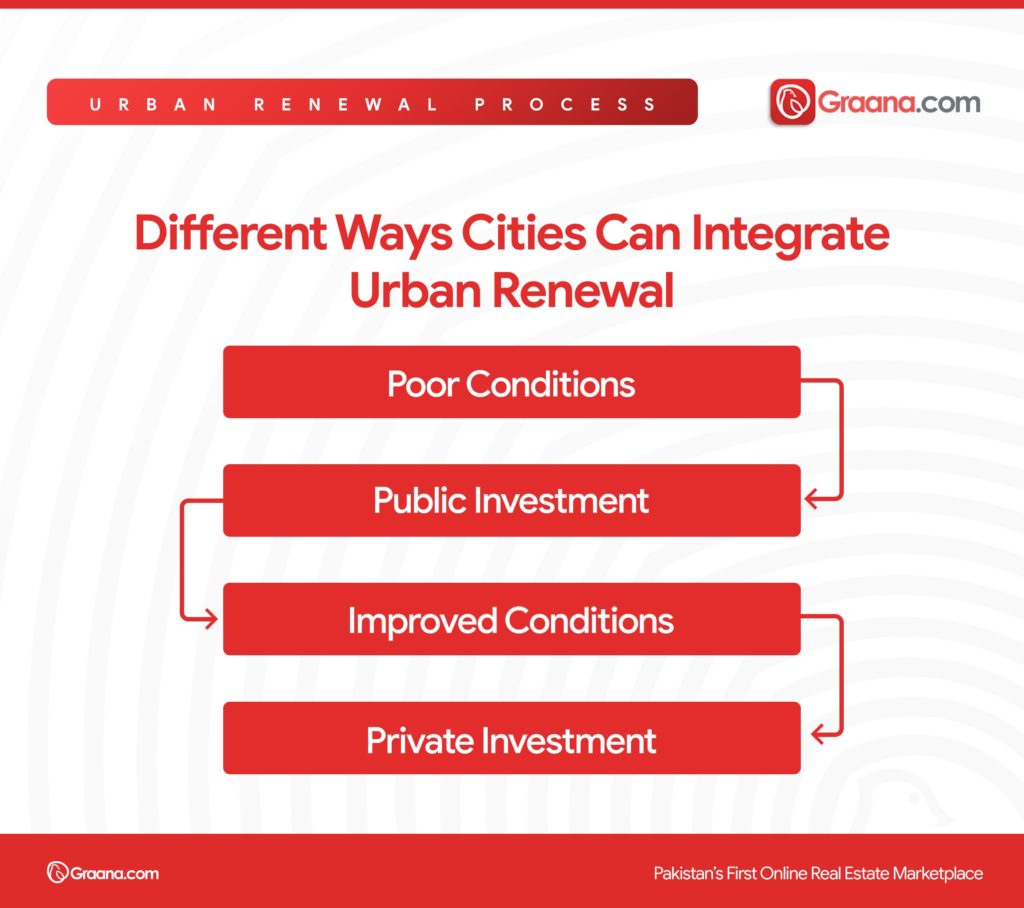 There are two major ways through which urban renewal can be adapted – regeneration and gentrification.

Urban regeneration is the redevelopment of dilapidated areas marked with poor environmental conditions, high population density, congestion, and related urban problems. It includes improving physical infrastructure through demolition and construction, renovation, and exciting start-ups to reverse the economic downturn and pump up private investments. Most importantly, regeneration does not include relocation or resettlement under any condition. It is also known as a ‘retrofitting’ or ‘revitalisation’ program.

Urban gentrification is characterised by transforming a metropolitan area from a low-value region to a high value. If urban renewal is targeted to develop a dilapidated region in a high-value neighbourhood, it can be categorised as urban renewal. Other times, it can result from specific urban renewal programs that inflate the region’s property values.

The term is derived from “gentry”, which means people of a higher social status. In 1964, the term was reintroduced by a renowned sociologist, Ruth Glass, when she studied the influx of middle-class residents into the previously low-income areas of London that belonged to the working class. Urban gentrification is often carried out under the clause of eminent domain, whereby public authorities can compulsorily reclaim private land for civic purposes.

The Impact of Gentrification:

In totality, gentrification means different things for different sections of society. For the well-off people, it presents an opportunity to acquire safe land. For private businesses, it opens up new market streams to elevate their sales. For governments, it offers a well-sustained tax base. For the local people, it can be a cost if their incomes do not grow simultaneously with the rising prices in the region. If gentrification leads to displacement, it can be deemed a failure of urban planning as it fails to sustain the existing population. In other words, gentrification has a human cost involved, which can lead to displacement, urban sprawl, and mushrooming of slums if not taken into consideration. Hence, urban renewal should always be targeted to rebuild and resuscitate existing communities, not to resettle.

How to Attract Overseas Investment in Pakistan?